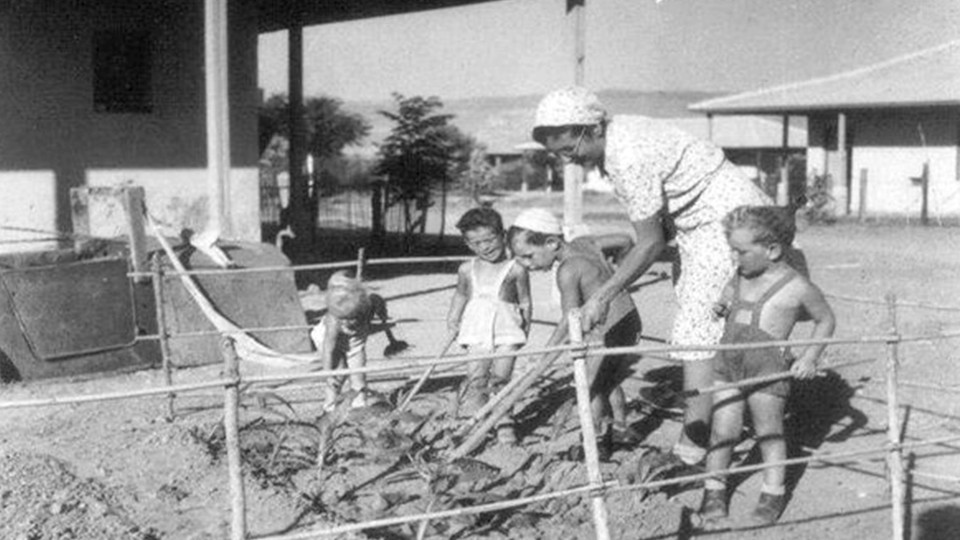 Malka Haas turned children loose to play with discarded objects, giving them a different sort of preparation for life.

(Read the piece in The Atlantic here.)

When you pass the kindergarten at Sde Eliyahu, a kibbutz near the Jordan River in northern Israel, you might not recognize it. Instead, you’ll see a yard for castaway objects: rusty tractor parts, old computers, and orphaned bike wheels. It takes a few moments to realize that some person, or many people, has devoted thought to arranging the parts into strange structures and machines.

What seems at first like a haphazard jumble in the yard at this kibbutz, and in hundreds of similar yards across Israel, is in fact the expression of a theory about how children should learn and a sharp critique of the way they’re usually taught. The kindergarten junkyard is countercultural at a moment preoccupied with safety and litigation—but may have something to teach parents who’ve just been through a yearlong education on the limits of education itself. The junkyard is one answer to a pressing question: When we teach kids, should we prepare them to climb an orderly ladder of tests that lead to other tests, grades, and degrees—or should we prepare them for chaos?

I found Malka Haas at Sde Eliyahu in the spring, in a knitted winter hat and sweater, sitting in a wheelchair pushed by her son, Elisha. She recently turned 100, has been blind for several years, and is now too frail to walk or be interviewed. But she was a dominant figure in the Israeli world of early-childhood education well into her 90s. My wife is from this kibbutz, a product of the kindergarten junkyard, and she—like everyone else who grew up here—speaks of Haas with great reverence and a little fear. Haas was never a teacher of the bubbly variety. She’s a tough woman who learned some tough lessons, and came up with tough ideas.

The junkyard playground was born on this kibbutz 80 years ago, along with the founders’ first kids. The people who built Sde Eliyahu, many of them German Jews who’d escaped the Nazis, were kids themselves: On the day in 1939 when the first tents went up on these steamy flatlands by the Jordan, Haas was 19. There were no adults around to give advice on how to raise a family. Their own parents were in Europe, where many were later murdered. They were on their own.

Like the rest of her comrades, Haas never had the chance to finish high school, but she’d attended a teachers’ seminary for six months, making her the kibbutz’s closest thing to an authority on education. She took charge of the kindergarten. Kibbutz ideology idealized frugality and rejected anything bourgeois—which was lucky, because in those years the kibbutzniks often lacked money for food, let alone toys. With no adult supervision and little allegiance to the way things had been done before, the kibbutzniks found the moment ripe for innovation.

The children were part of a community of workers, Haas thought. They should play with discarded objects from the fields, workshops, and kitchens, putting them to whatever use they desired. They’d build together with no instruction, and what they built didn’t have to make sense to adults. As she explained much later, after her ideas became celebrated and were taught to aspiring teachers, pieces of junk “do not represent the broken, rusty, dirty remnants of human activity, but rather all the multifaceted richness that life has to offer.”

The distance between Haas’s ideas and current fashions is illustrated in a scene Haas describes in her 1985 treatise, “Children in the Junkyard.” A few 5-year-old girls are in the yard working—that word being one she preferred to the word play. The girls are in a structure they built themselves, and furnished with cast-off chairs, jugs, and cutlery. They’re a family, and it’s the Sabbath. (Most kibbutzim were founded by committed atheists, but this kibbutz is religious, an attempt to combine socialism and traditional Judaism.) One girl is pretending to sleep in a basket padded with rags. Another, Avishag, in the role of the mother, goes over to a nearby bush, picks some pink flowers for the Sabbath table, and puts them in a plastic bottle. The flowers, one learns in Haas’s offhand description, are oleanders, which are beautiful, and also so toxic that they can kill you.

Indeed, this junkyard scene would inspire queasiness in any safety inspector and giddiness in a personal-injury attorney. Who lets kids play with oleanders? But this was a feature of the theory, not a bug. Life is dirty and dangerous. Sometimes you’re going to get hurt.

Some people asked Haas, for example, if it was a good idea to let children work barefoot in the yard. The answer, she wrote, was obvious: “A barefoot child learns faster to take care of himself, because the feelings he gets through his feet sharpen his understanding.” Her articles are among the rare works on education that stress the importance of tetanus shots. Her attitude is still very much alive on the kibbutz, as I learned when my twin sons were about 4 and their grandfather, the kibbutz electrician, who himself grew up in Haas’s junkyard, went to an old box of toys and pulled out the kids’ saw. The kids’ saw turned out not to be plastic, as I’d expected, but sharp (if rusty) steel—a completely real saw made for kids.

Malka haas was born in 1920 to a middle-class family in Berlin, the daughter of a lawyer. Her parents were Jewish but considered themselves German. She was kicked out of school when Nazi race laws came into effect after 1933, joined a Zionist youth movement, and made her way to British Mandate Palestine when she was 15. She stopped using the name her parents gave her, Hilde, and began calling herself Malka, a Hebrew word that means “queen.” According to Elisha, when she boarded the train from Berlin to her new life, her mother gave her a sandwich to eat on the way: “In a characteristic move, she threw it out the window.”

Her parents survived in the Nazi capital until 1941, when they escaped on a train to Seville, Spain, and managed to get to the United States. Haas lived through Israel’s War of Independence in 1948, including a battle with invading Iraqi troops by the fields of the kibbutz. She had a little brother whom she met for the first time when he was 22. For a Jewish family in those years, this was a happy story.

“The children have to know,” Haas told an interviewer in 2010, “that when they work in the yard unexpected things are going to happen. The question is how you learn to deal with it. The entire lives of these children will be dealing with the unexpected, but without meaning to we wrap them in cotton balls.”

This wasn’t just an educational approach, but an extension of her personality, as her son, a professor of biophysics, described it. His mother came from a social group known here as “yekkes,” middle-class German Jews whose uptight attitude was out of step with the irreverent egalitarianism of Israel’s founders. (The term literally means “jackets,” an item of clothing for which they supposedly had an irrational attachment despite the climate and the official preference for proletarian khaki.) “The yekkes don’t hug,” Elisha Haas told me. “They show love another way, by dedication to the child, by investment. That’s how the child knows he’s important.”

Malka Haas was an autodidact who came about her ideas by herself in her remote valley in the early 1940s, but others were thinking along similar lines in the chaotic years around World War II. The best-known example probably comes from postwar Britain, where Lady Marjory Allen of Hurtwood proposed an antidote to the mind-numbing four s’s—swing, seesaw, sandbox, slide—in the form of “adventure playgrounds,” yards of thrilling junk set up on the sites of buildings that had been bombed by the Germans. These ideas flew against other popular theories arguing that young children should be protected from things like bombed-out buildings and granted a world of order and beauty. The Montessori schools, for example, believed that each educational object should be “always beautiful, shining, and in good repair, with nothing missing, so that it looks new to the child, and is complete and ready for use.”

The truth is that we know little about what actually works for teaching children, Deborah Golden, an education professor at the University of Haifa, told me. Golden is the author of several recent articles about the kibbutz junkyard, part of a modest renewal of interest in Haas’s theories. It’s virtually impossible to know, she said, if a functional adult is that way because her school offered her beautiful toys or a junkyard, or if the credit belongs not to school at all but to her parents or society. “Childhood is a huge space that allows us to imagine ourselves into it,” Golden said. Adults choose educational ideas that make sense to adults. The kibbutz junkyard might appeal to me, in other words, because of the uninspiring safety of my own childhood in Toronto, a place not big on danger. Or, after the past year, because it’s the opposite of the mind-deadening depersonalization of Zoom.

Israeli kids are allowed more freedom and risk than kids in many Western countries, but even here fashions are now moving in a different direction. Nadav Strizover, a friend of mine who teaches kindergarten in the northern city of Akko, described how several different levels of safety inspectors come regularly to look over the yard where his pupils play, wielding intricate manuals and eliminating hazards that happen to be the activities the kids like most. The inspectors will be happy, he said, when the yard is “a little plastic house standing alone on completely flat synthetic grass.” He studied Haas’s theories, and admires them, but can’t implement them. That’s one reason that today the junkyards can mainly be found on rural kibbutzim, which still have more autonomy than urban kindergartens subject to municipal inspectors and litigious city parents. The new interest in the junkyard idea, said Golden, is driven partly by the sense that it’s endangered—that without proper appreciation, it will be safety-inspected and sued out of existence.

The kindergarten junkyard was developed in a unique set of circumstances: a poor kibbutz in the 1940s, young parents who’d seen the worst of what the world can deliver and wanted kids who could cope. Perhaps our world is fundamentally different. Today’s parents might have assumed as much when we were growing up. But after the past year, when chaos arrived in Western homes after a few generations of predictability, with formal education in tatters and signs that children are struggling to manage, that argument is harder to make. We might be learning what the young Malka Haas knew: Life won’t go according to plan. It’s going to give us junk, and we’ll have to make it work.